I had read somewhere that Emily Dickinson was a baker, but I somehow pictured the reclusive poet making only loaves of spartan bread. When I began reading about her cooking, however, I realized that my image of her was all wrong. She was a prolific and joyful baker, and she delighted in making not just bread (and very good bread) but also puddings, cakes, gingerbread, and candies.

In 1845, the 14-year-old Emily wrote her friend Abiah Root, “I am going to learn to make bread to-morrow. So you may imagine me with my sleeves rolled up, mixing flour, milk, salaratus, etc., with a great deal of grace.” A decade later, Dickinson’s “rye and Indian” bread won a prize at a local cattle show, and she was doing much of the baking for her family in Amherst, Massachusetts. But the poet’s passion for desserts is what really struck me. Her friend Thomas Wentworth Higginson wrote his wife that Dickinson told him, “People must have puddings,” and this was said to him “very dreamily,  as if they were comets — so she makes them.” 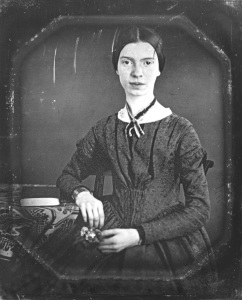 Dickinson seems to have found poetic inspiration in the kitchen. While cooking, she sometimes wrote drafts of poems on scraps of paper, including the backs of recipes, shopping lists, and even the wrapper for a bar of Parisian baking chocolate.

She often discussed baking in her letters, and her language about food was passionate and playful. In one letter, she wrote that she was “pleased the Gingerbread triumphed,” while another referred to “the glory” of two loaves of bread.

Dickinson loved to bake for others and kept doing so even after she stopped leaving her home. She sent cakes and candies to neighbors and friends, and she would lower baskets filled with cake or gingerbread from her window to children in the street below. Not exactly what one would expect of a recluse!

Dickinson had two recipes for coconut cake. One was from her neighbor Mrs. Carmichael,  on the back of which Emily wrote a poem (“The things that never can come back, are several –”). Another was found inside a first-edition book of Dickinson letters. I think the Carmichael recipe is older, as it contained no chemical leaveners, just many more eggs. Here is an image of the second recipe, followed by an easier-to-read transcription:

I wanted to show the original recipe so that readers can see Dickinson’s wonderful curlicued “c’s”. Note also the spelling “cocoanut,” a confusion of coconut with cocoa that apparently started with an entry in Samuel Johnson’s 1755 Dictionary and continued for centuries. The reference to “half the rule” at the end means that the ingredients are enough for half a cake, so the size of a loaf pan.

Coconuts were common enough in North America by the mid-19th century to be available even in small towns in Massachusetts. They were shipped from Cuba and elsewhere in the West Indies and the Caribbean. John Mariani’s Dictionary of American Food and Drink dates coconut cake to 1830, though I think coconut pie (then called “pudding”) was more common until later in the century. Dried, flaked coconut wasn’t available, however, until the 1890s, so baking with the fruit required more work.

I am the lone coconut fan in a household of coconut haters, but I couldn’t resist making this recipe. Although it listed only ingredients, not directions, it seemed easy enough. I read on several blogs (including Tori Avey’s excellent History Kitchen) that this cake was good but a little heavy, so I tried it with cake flour instead of all-purpose. I also used sweetened flaked coconut instead of a raw coconut (yes, I know, not authentic, but so much easier).

There were no icing instructions for this cake. It was meant to be a simple loaf cake, not the coconut layer cake we think of today, covered with fluffy frosting (that’s a Southern tradition). This one really doesn’t need icing, however — it’s rich with butter and coconut, and is just sweet enough. I think, as Dickinson might have said, that it triumphed! 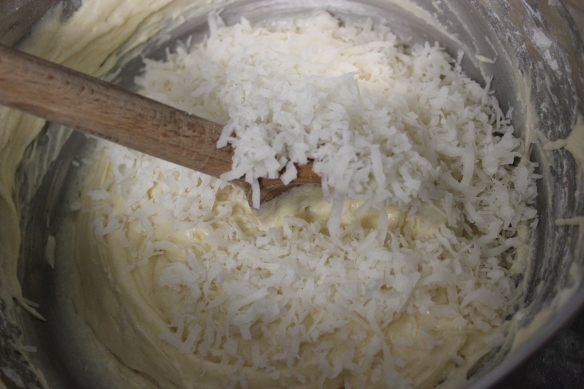 2. In a large bowl, beat the butter and sugar together until light and creamy. Add the eggs and beat well.

5. Pour batter into the prepared pan. Bake on middle rack of oven for about 55-60 minutes, until golden around the edges and a cake tester or toothpick comes out clean. Let rest in pan for 10 minutes, then turn out onto a rack and let cool completely.