“Why are they called sand tarts?” asked my daughter. I told her that I think it’s because these delicate sugar cookies crumble like sand when you eat them.

Growing up, I looked forward to eating sand tarts every Christmas at my grandparents’ house in Pennsylvania. They are common in Pennsylvania Dutch country and throughout the state. My grandmother baked a lot of good cookies during the holidays, but this one was my favorite. She made them so thin you could practically see through them, and they were a sugary, buttery delight.

The Pennsylvania sand tart seems to have several European sources, including Sandbakelse, Norwegian sugar cookies that date to the mid-19th century. These are pressed into tins, and the baked cookies are sometimes filled with preserves or fruit. There is also a German cookie called Heidesand, or “heath sand.” But unlike sand tarts, it contains no egg and so is more like a shortbread.

Another possible sand-tart relative is the sable (French for “sand”), found in France’s Normandy region. Interestingly, there is also a cookie in the American South called a sand tart, but it is thick, crescent shaped, and rolled in confectioner’s sugar. It doesn’t seem much like the other “sand” cookies.

The earliest printed recipe that I found for Pennsylvania-style sand tarts was in Mrs. Rorer’s Philadelphia Cook Book (1886). It calls for a pound of granulated sugar, a half pound of butter, three egg yolks, two egg whites, and “flour to make a stiff paste.” It reads as follows:

Beat the butter and sugar together; add the yolks beaten to a cream, then the whites well beaten; mix all well together, and add the flour. Roll out on a  baking-board, cut with a round cutter, and bake in a moderate oven until a light brown.

Some sand-tart recipes (including my grandmother’s) contain much more butter than this one, in the tradition of the Norwegian sandbakelse. I tried Rorer’s recipe, and the cookies were good but not as rich and crumbly as my grandmother’s, probably because there is half as much butter in them! Rorer’s dough was less sticky, however, and so easier to roll and cut.

The more I researched sand tarts, the more variations I found — in relative amounts of  butter, flour, and sugar, and in types of sugar (some were made with brown or confectioner’s sugar). Most recipes called for topping the cookies with cinnamon sugar, and some with nuts as well. Fannie Farmer’s 1896 Boston Cooking-School Cook Book suggested three blanched almond halves on top, a finishing touch that is still common today.

Whatever sand tart recipe you use, you must keep the dough very cold, rolling out small portions and putting scraps back in the refrigerator as necessary; you also need to flour your board and rolling pin and move the dough around frequently. Roll the dough so thin that you can see the board through it: 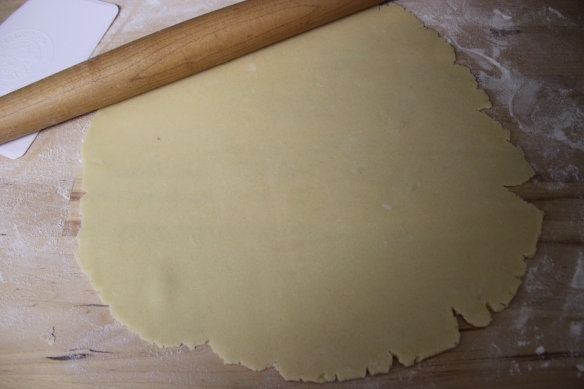 My grandmother used a cotton pastry cloth and rolling pin cover, but I never really got the hang of those. I use a tapered pin, and flour it and the board frequently, although you need to be careful not to work too much extra flour into the dough. I tried rolling the dough on a silicone mat to see if it would stick less, but I don’t think it made a difference. Just keep your dough cold and try to work quickly.

The recipe below is based on the one used by my grandmother, Helen Keeley. I usually put just cinnamon sugar on the cookies, but at my ten-year-old’s request I’ve begun sprinkling colored sanding sugar on some of them. That’s not very authentic, but they look nice for the holidays.

1. In a large bowl, cream the butter and 1¼ cups of the sugar until light. Add the beaten egg and blend well. Gradually add the flour, mixing well.

2. Divide the dough into three or four flattened rounds, wrap the discs in plastic wrap, and refrigerate for at least four hours, and preferably overnight.

3. Let dough rest at room temperature for about 15-30 minutes, until just soft enough to roll. Meanwhile, preheat oven to 350°F and cover several baking sheets with parchment, or grease them with butter or vegetable shortening.

4. Flour rolling surface and pin well. Roll dough as thin as you can — preferably ⅛-inch thick or less. Cut shapes from dough with round cookie cutter or holiday shapes and transfer to baking sheets.

5. Mix the remaining ¼ cup sugar with the cinnamon. Sprinkle the cookies with cinnamon sugar, or with colored sugars. (If you’d like the sugar to stick well, beat an egg white with about a tablespoon of water and brush cookies lightly with the egg white before topping with sugar.) You can also press nut halves into the cookies if you wish.

6. Bake cookies for 5-7 minutes, until just golden around the edges. Watch them carefully as they burn easily! Remove from oven, let sit a minute or two, then transfer to wire racks to cool. Store in airtight containers.