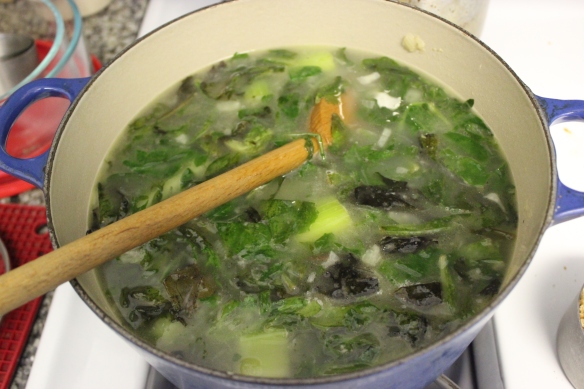 It’s a coincidence that I made soup meagre during Lent, but my timing was good, since in the 18th century this meatless soup was traditionally made in the latter part of Lent, when springtime greens were just becoming available.

Soup meagre is a very simple dish, thus the name. I assumed “meagre” was a French word, but it’s the British spelling of “meager,” from the Old French maigre. In the oldest recipe I could find (in the Ashfield Recipe Book, 1723*), sorrel, parsley, cabbage, and onions were boiled in water, after which dried bread, cloves, salt, and pepper were added. Then, because this is colonial cooking, half a pound of butter was added. The soup was then boiled for two hours. When the soup was made late enough in spring, peas were included as well.

I first tasted soup meagre last summer at a wonderful open-hearth cooking class taught by Sarah Lohman of the blog Four Pounds Flour. (To see the soup meagre we made there, click here.) Sarah modernized the Ashfield recipe, cutting back on the amount of butter and leaving out the bread. She also altered the technique a bit, sautéeing the onions in butter to start (this method was used later in the 18th century by Hannah Glasse).

It was a very nice soup, but I wanted to try making the dish following an 18th-century recipe more closely. I decided to use Hannah Glasse’s recipe, from The Art of Cookery Made Plain and Easy (1774):

Take a half a pound of butter, put it into a deep stew pan, shake it about, and let it stand till it is done making a noise; then have ready six middling onions peeled and cut small, throw them in and shake them about; take a bunch of celery clean washed and picked, cut it into pieces half as long as your finger, a large handful of spinach clean washed and picked, good lettuce clean washed, if you have it, and cut small, a little bundle of parsley chopped fine; shake all this together well in the pan for a quarter of an hour, then shake in a little flour, stir altogether, and pour into the stew pan two quarts of boiling water; take a handful of hard dry crust, throw in a teaspoonful of beaten pepper, three blades of mace beat fine, stir altogether, and let it boil softly for half an hour; then take it off the fire, and beat up the yolks of two eggs and stir in, and one spoonful of vinegar; pour it into the soup dish and send it to table. If you have any green peas, boil half a pint in the soup for change.

I made this pretty much as Glasse wrote it, down to the celery pieces “half as long as your finger.” Unfortunately, it was inedible — to my 21st century palate, at least.

So I tried again, making most of the changes Sarah Lohman had, wise woman that she is. I cut the amount of butter in half and left out most of the flour and all of the bread. And I skipped the egg yolks. I also used some chicken broth in addition to water, although I think you could use just water or vegetable broth if you want to keep this soup meatless.

This new version tasted much better. The texture was less gruel-like, and the flavor of the greens came through. Still, I didn’t even attempt to get my nine-year-old to try it (too many vegetables). But if you like escarole soup, you might enjoy this. And if you wish, you can experiment with all kinds of greens, from lettuces to asparagus.

1. Melt the butter in a large kettle or Dutch oven over medium heat. When the bubbling has subsided, add the onions and cook for about five minutes, until transparent.

2. Add the celery, greens, and parsley, stir, and cook over medium heat for about 10 minutes.

3. Sprinkle the flour over the greens and stir to blend. Add the chicken broth, water, salt, pepper, and mace, and stir well. Simmer the soup over medium-low heat for about 30 minutes.

4. Taste and add more salt and pepper, if desired. Serve warm. (Note: This soup tastes best the day it is made.) 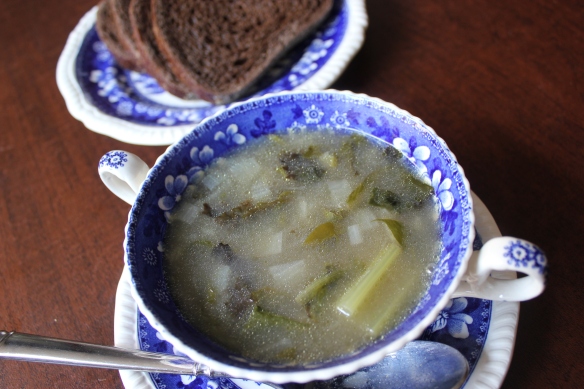 *The Ashfield Recipe Book, kept by the Ashfield family of New York City and New Jersey from the 1720s until the Revolutionary era, is included in Pleasures of Colonial Cooking, published by the New Jersey Historical Society (1982).