Stewed sparrows, boiled rabbits, barbecued opossum…game recipes like these are common in 18th-century cookbooks, but I tend to avoid reading them. And I can’t look at the skinning illustrations in Joy of Cooking without feeling queasy. Since it’s illegal to sell wild game in New York City, these animals also aren’t easy to come by here. That was my excuse for a while not to try. But I started thinking about how ridiculous my mindset would be to 18th-century Americans, for whom a brace of rabbits was a welcome meal.

So I decided to cook a rabbit, in search of my inner colonial (or something like that). I found frozen ones at a local butcher shop and started reading old recipes. Here are Hannah Glasse’s instructions for “A Fricase of Rabbits” from The Art of Cookery (1774), quoted in Doris Farrington’s Fireside Cooks & Black Kettle Recipes:

“Take [the rabbits] and Cut them in little pieces, and Wash them, to a Cuple, take a Quarter of a pd of Butter, and Melt it in a Saucepan, and when it is very hott power it on your Rabbits, & Some Lemon Pill & a little Oring, lett it Stew till Enough, Stir it some times, then take Some Strong Broth and Cutt a few Musherams into it, & one Anchovie, & grate a little Nutmegg, & put all to your Rabbits, with a bunch of Parsaly, & Time, then thicken it up 2 yolks of Eggs, beat in a little White Wine and dridg on a little flower…have ready broyled bits of Bacon, and lay upon it, and when it is in ye Dish & Sliced Lemon, & Garnished with Pickles.”

I ended up using a fricassee recipe in the 1975 Joy of Cooking, which was pretty similar to Glasse’s but easier to follow. I’m not reprinting it here because the result was just okay. It tasted a lot like chicken, only more expensive.

Then I tried making hasenpfeffer, or rabbit stew, a dish that is German in origin and was common in Pennsylvania Dutch country in the 19th century, and possibly earlier. German immigrants often cooked the dish with squirrel instead of rabbit. The meat is marinated for hours with wine and vinegar to make it tender; this was especially important in the days when large hares were often used.

And now, if you’re about my age, you’re singing “Schlemiel, Schlimazel! Hasenpfeffer Incorporated!” from Laverne & Shirley — or remembering the great Bugs Bunny short Shishkabugs, in which Yosemite Sam tries to trap Bugs to cook hasenpfeffer for the king.

But back to my recipe. I made Mark Bittman’s version from The Best Recipes in the World, which is based on both German hasenpfeffer and French civet of rabbit. Bittman’s recipe contains unsweetened chocolate, a French tradition. (Chocolate wasn’t really used in colonial American foods except beverages, but I couldn’t resist keeping it.) The dish was pretty good, but I don’t think I’ll be cooking rabbit again. My daughter refuses to eat it, and I wasn’t really comfortable with it, either. But the experience did make me reflect on how food preferences change over time, as do our views about the appropriateness of eating certain animals and not others — or any at all.

Hasenpfeffer
Adapted from The Best Recipes in the World

1. Mix the first five ingredients in a large bowl. Add the rabbit, 1 teaspoon salt, and 1 teaspoon pepper. Marinade in the refrigerator, turning the rabbit pieces occasionally, for at least 8 hours. 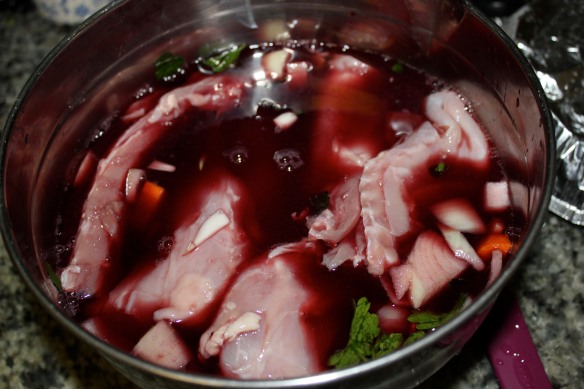 2. Strain the marinade, reserving it, and dry the rabbit pieces. Cook the bacon over medium-low heat in a Dutch oven or large skillet. When it is crisp (5-10 minutes), remove it and add to the pan the remaining two cups onion, diced carrot, celery, and mushrooms. Cook, stirring, over medium-low heat. 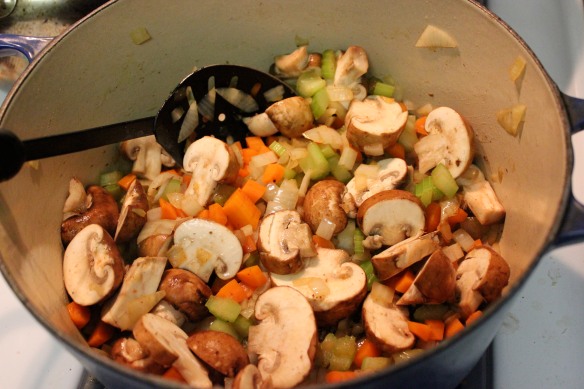 When vegetables are soft (about 10 minutes), remove them from the pan with a slotted spoon and add to the bacon.

3. Increase heat to medium. Dredge the rabbit pieces in the flour, and brown them in the fat remaining in the pan (add a little olive oil if necessary), turning occasionally and adding a little salt and pepper as they brown. When the rabbits are browned, put the vegetables and bacon back in the pan and stir. Add the reserved marinade, bring to a boil, stir, and add the chocolate and about 1/2 teaspoon each salt and pepper.

4. Lower the heat, cover, and cook until the rabbit is tender and the sauce is thick, about an hour. Add salt and pepper to taste and serve hasenpfeffer with noodles, rice, or bread. 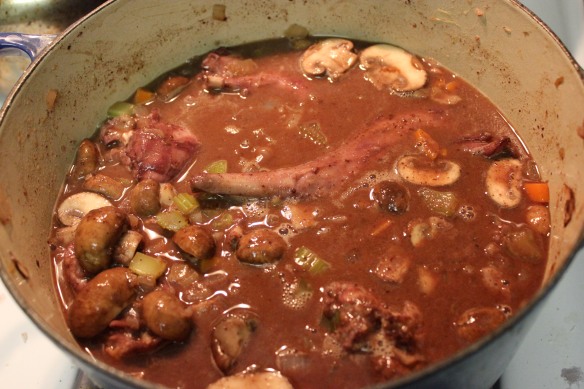