I wanted to make transparent pudding because the name seemed so intriguing — and I wanted to see if it was actually transparent. It’s not, but the filling is sort of cloudy. It’s also more like a pie, but in the 18th century, this type of dessert was called pudding. (For more on the complicated history of pudding in England and America, see foodtimeline.org.)

Beat eight eggs very light, add half a pound of pounded sugar, the same of fresh butter melted, and half a nutmeg grated; sit it on a stove, and keep stirring till it is as thick as buttered eggs—put a puff paste in a shallow dish, pour in the ingredients, and bake it half an hour in a moderate oven; sift sugar over it, and serve it up hot.

Transparent puddings were made in New England and Pennsylvania Dutch country as well as in the South, where a similar dish called chess pie is still popular. Chess pie is made with fewer eggs and usually contains milk and a little cornmeal, to thicken the pie. Vinegar is sometimes added to temper its sweetness. See Jean Anderson’s “The South’s Storied Chess Pie” on gourmet.com for a good history of this pie and the transparent pudding connection.

I made the recipe in Anderson’s article, but I found it too sweet — and that’s not something I say very often. I guess you need to have a Southern taste. Then I tried a recipe closer to Mary Randolph’s, from Colonial Williamsburg’s Historic Foodways blog, History Is Served. Since it had more eggs, I figured it would be less sweet.

I wasn’t thrilled with this one, either. The filling didn’t puff up during baking, probably because I didn’t beat the eggs enough. I also used a regular pie crust, not the puff pastry called for in the recipe, and the result was pretty lackluster. I was going to give up on transparent pudding, but my daughter urged me to keep at it. “Third time’s lucky!” she said. So I tried again, armed with an electric mixer (to beat all those eggs) and frozen puff pastry. Yes, I know, not very authentic colonial cooking. But it worked. The flaky puff pastry complemented the rich filling, and the filling had an airier texture — custard-like with an ever-so-slightly translucent middle. They should have called it translucent pudding!

2. Beat the eggs until they are light in color using a whisk or an electric mixer.

3. In a large saucepan, blend the eggs with the butter, sugar, and nutmeg. 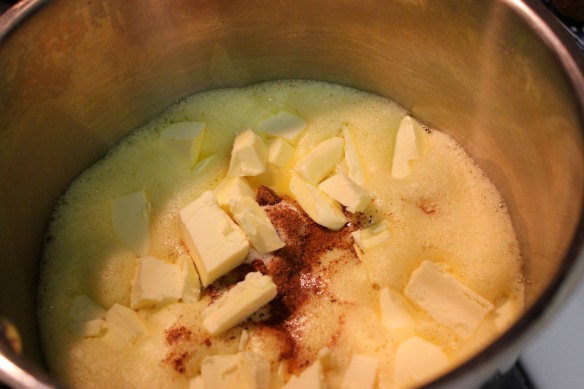 Cook on medium-low heat, stirring constantly, until the mixture is thick and coats the back of a spoon. (It should not be clumpy.) Remove egg mixture from the heat, place in a bowl, and let cool, stirring occasionally.

4. Prepare puff pastry or use frozen puff pastry sheet, following package directions for thawing (I used one sheet from a 17.3-ounce package). Roll out dough and line the pie pan, trimming excess pastry.

5. Pour cooled filling into pan and bake for 40 to 45 minutes, or until the pudding is set and the crust is brown around the edges. The filling will puff up during baking. Turn off the oven and leave the pudding inside for an additional 10 minutes, then remove and cool on a wire rack. Let cool before slicing (the filling will fall as it cools). Serve at room temperature. This dish is best the day it is made.