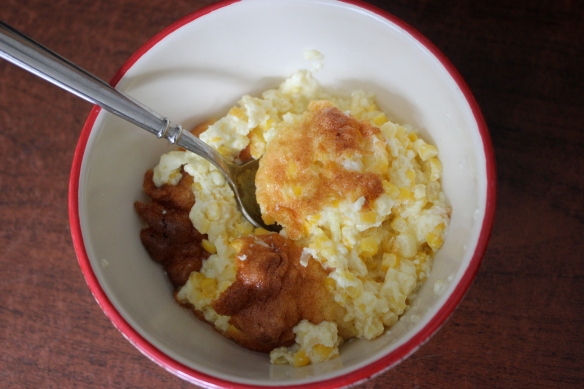 I couldn’t let August go by without writing about corn, a mainstay of the 18th-century Americans’ diet. I’ve posted several cornmeal-based recipes, but wanted to try one with fresh corn — especially the mysterious “green corn” I kept seeing in old recipes.

It turns out that “green corn” just refers to young ears of sweet corn, and also to varieties developed to ripen in early summer. This corn was often roasted by Native Americans and North American colonists, or used in stews. The forerunner of corn pudding was Native American succotash, corn stewed with vegetables like beans. But as Betty Fussell writes in The Story of Corn, whereas Native Americans sometimes added “hickory cream,” made from ground nuts, to thicken their corn stew, the settlers used cow’s milk, and often mixed in a little butter. END_OF_DOCUMENT_TOKEN_TO_BE_REPLACED

Copyright © 2012-2020. All articles and images posted to this blog are copyrighted by Karen Hammonds.