“My brain can’t decide whether to freeze or melt,” said my daughter while eating Baked Alaska the other night. Her words echoed a stodgier observation by 19th-century British journalist George Sala: “The transition from the hot outside envelope to the frozen inside is painfully sudden, and not likely to be attended with beneficial effect.”

Unlike Sala, my child liked this warm-cold sensation, and she loves Baked Alaska, a sponge cake topped with ice cream and encased in meringue, which is then baked quickly at a high temperature. The ice cream does not melt because the air-filled meringue is a poor conductor of heat and so acts as insulation. So does the cake, to a lesser extent.

The dessert that Sala ate was a little different from Baked Alaska as we know it today. Called “Alaska, Florida,” it was created by French chef Charles Ranhofer at Delmonico’s restaurant in New York. Ranhofer filled small biscuits with apricot marmalade and banana and vanilla ice cream, then covered these with meringue and baked them. The dessert’s name probably refers to the contrast between cold ice cream (Alaska) and warm meringue (Florida). It was supposedly made to celebrate the U.S. purchase of Alaska from Russia in 1867, although there’s no proof of that. Below is Ranhofer’s recipe from The Epicurean (1893), with illustrations of the ice cream mold on the left, and the finished dessert (I think) on the right. It was said to resemble an iceberg.

There’s a lot of conflicting information on the Internet about the origins of Baked Alaska. According to Lynne Olver’s Food Timeline, the dessert has roots in Renaissance-era trifles made from cream and sponge biscuits. Frozen versions of these trifles were created in 18th- and 19th-century Europe. Thomas Jefferson served ice cream balls surrounded by warm pastry at the White House in 1802, although as usual he was a bit ahead of the times — this dish wasn’t widely known until the 1860s, when the chef of a Chinese delegation visiting Paris demonstrated a similar dish.

The French Omelette Soufflé Surprise, a génoise sponge cake covered with ice cream and meringue, was probably the prototype for America’s Baked Alaska. This dish has often been attributed to American-born inventor Benjamin Thompson, aka Count Rumford, who allegedly created the dessert in France while conducting experiments with the insulating properties of meringue. But food historian Jim Chevallier argues on his blog Les Leftovers that Rumford’s writings don’t support this claim. He also points out that Rumford died in 1815, decades before the Surprise became popular. It’s unclear exactly when this dish was invented, but it wasn’t well known until late in the 19th century. A similar dessert called Omelette Norvégienne was created in 1895 in Monte Carlo and became a sensation — this was a rectangular cake with a layer of fruit as well as ice cream under the meringue.

A recipe closely resembling the Omelette Surprise was published in 1877 in New York by Mary Foote Henderson, in Practical Cooking and Dinner Giving. Called “German Steamer Baked Ice-cream” because it was served on a trans-Atlantic crossing, the dish had a round sponge-cake base topped with ice cream and then meringue. The meringue was browned with a “red-hot salamander” [a heated metal plate] or in an oven.

Mrs. Henderson sounds like a fascinating woman, incidentally. She was an influential Washington hostess married to Senator John B. Henderson, sponsor of the 13th Amendment abolishing slavery, and she was involved in causes ranging from women’s suffrage to city beautification. She also became a healthy living crusader and would probably not have eaten one forkful of Baked Alaska later in her life.

Desserts like Mrs. Henderson’s German steamer dish and Ranhofer’s “Alaska, Florida” became more common in the 1880s and 1890s, as did bombes, domes of layered ice cream. The popular Mrs. Rorer’s Philadelphia Cook Book (1886) included a recipe for “Alaska Bake,” a brick of ice cream topped with meringue and baked (but with no cake under it). The first printed recipe actually titled Baked Alaska appeared in Fannie Merritt Farmer’s Boston Cooking-School Cook Book (1896):

Make meringue of eggs and sugar…. cover a board with white paper, lay on sponge cake, turn ice cream on cake (which should extend one-half inch beyond cream), cover with meringue, and spread smoothly. Place on oven grate and brown quickly in hot oven. The board, paper, cake, and meringue are poor conductors of heat, and prevent the cream from melting. Slip from paper on ice cream platter.

I tried making Farmer’s exact recipe and ended up with a dome of ice cream so gigantic that my dessert looked like a bowling ball. Later Baked Alaska recipes usually call for just one or two pints of ice cream, so I tried again with less ice cream. I also replaced the chocolate ice cream with strawberry, since many early recipes called for it. My chocolate-loving husband and daughter weren’t very happy about this, but I think strawberry works well as it doesn’t overpower the rest of the dish, and it looks beautiful. But use whatever flavors you wish. You can also use a store-bought sponge cake, but the cake recipe below is very easy.

1. Preheat oven to 325°F. Line the bottom of a 9 × 2-inch round pan with parchment paper. Beat the egg yolks, hot water, and vanilla together until thick and pale. Slowly beat in 1/2 cup of sugar; set aside.

2. Beat the egg whites until foamy, add the salt, and continue beating until they hold soft peaks. Gradually beat in 1/4 cup sugar and beat until stiff but not dry. Whisk the flour and baking powder together. Stir a fourth of the whites into the yolk mixture, then sift the flour mixture over them and blend gently. Fold in the remaining egg whites. Pour batter into the prepared pan and bake 25-30 minutes, or until a toothpick comes out clean. Loosen edges of cake with a knife, then invert onto a rack and let cool completely.

3. Soften ice cream slightly. Place vanilla ice cream in a metal bowl no wider than the cake, and press down to flatten; follow with strawberry ice cream, pressing down again. Freeze ice cream until firm. 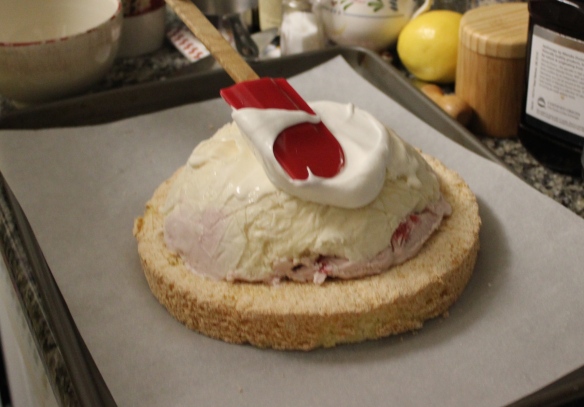 5. Line a large baking sheet with a square of parchment paper. Place cake in center of sheet. Unmold ice cream, rinsing underside of bowl in warm water briefly if necessary, and turn upside down on top of cake. There should be a small border of cake around the ice cream. Cover cake and ice cream with meringue, making sure to cover entire surface down to the parchment paper. Make decorative swirls in meringue. Place in oven and bake 3–5 minutes until meringue is golden brown in spots, watching closely to make sure the meringue doesn’t burn. Serve immediately.