“The apotheosis of corn bread, the ultimate, glorified ideal,” wrote journalist John Egerton about spoon bread in his book Southern Food (1987). I would agree with that. My family jokes about how besotted I’ve been with this dish ever since we ate it at the Christiana Campbell Tavern in Colonial Williamsburg.

Spoon bread at its best is like a soufflé version of cornbread, slightly crusty and chewy on top and soft and airy inside. The dish evolved from Southern cornbreads during the 19th century, and although it is still made in the South, it’s unfortunately not as common as it used to be.

Oddly, the term spoon bread didn’t appear in print until about 1904. The name may derive from suppone or suppawn, a Native American word for mush made from cornmeal mixed with boiling water. Spoon bread evolved much later, however, so it seems more likely that the dish is called spoon bread because it’s so soft that you need to eat it with a spoon.

Mary Randolph’s “batter bread,” in The Virginia Housewife (1824), is often cited as the first spoon bread recipe. But unlike later spoon breads, it contained more flour than cornmeal and was baked in small tins. A dish more like modern spoon bread is Sarah Rutledge’s Owendaw Corn Bread, from The Carolina Housewife (1847):

Take about two teacups of hominy, and while hot mix with it a very large spoonful of butter (good lard will do); beat four eggs very light and stir them into the hominy; next add about a pint of milk, gradually stirred in; and lastly, half a pint of corn meal…. Bake with a good deal of heat at the bottom of the oven, and not too much at the top, so as to allow it to rise. The pan in which it is baked ought to be a deep one, to allow space for rising.

Rutledge wrote that this dish “has almost the delicacy of a baked custard,” so it was quite different from the stiff cornbreads common at the time.

The first known cornbread recipe with “spoon” in the name is “Spoon Corn Bread” in The Blue Grass Cookbook (1904):

Bake in an earthen dish for an hour. Serve with a spoon.

Now that’s what I call a succinct recipe! Note the large amount of buttermilk, and also the use of baking soda. Buttermilk is called for in many old spoon bread recipes, whereas others use regular or “sweet” milk. The type of cornmeal is rarely specified, but white was probably more common than yellow, since it’s preferred in most areas of the South. Spoon bread made with yellow cornmeal isn’t unusual, however.

The cooking methods for this dish vary as well. In some recipes, hot or boiling water is poured over the cornmeal, and milk, eggs, and leavener are added later. Others instruct the reader to simmer the cornmeal before adding other ingredients. Finally, some recipes call for separating the eggs and adding the whites last, to make the dish airier.

I tried out several spoon bread recipes, including a buttermilk version from the first edition of The Joy of Cooking (1931), which turned out too soft and mushy. I used white cornmeal for that and have a theory that it simply doesn’t cooperate in Yankee hands! I eventually found success with a recipe by Marion Cunningham, author of the revised Fannie Farmer Cookbook. This recipe may not be old, but it’s clearly based on early 20th-century recipes. The spoon bread was wonderful — moist but not mushy, with some real texture to it. It came out of the oven puffed up, then deflated like a soufflé. This dish is best served warm, with a pat of butter. 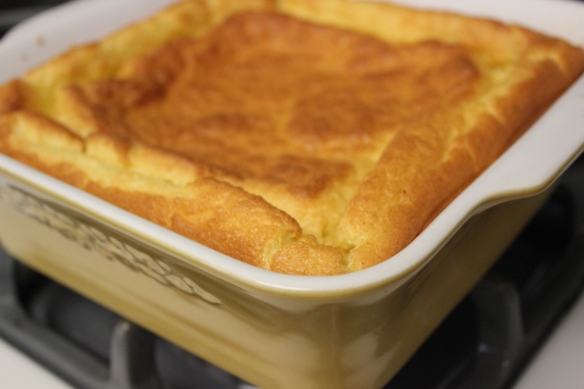 2. In a large bowl, slowly pour the boiling water over cornmeal, stirring briskly to prevent lumps from forming. Add the butter while the mixture is still hot and stir to melt and blend. Let the mixture cool several minutes from hot to warm, then add the egg yolks, buttermilk, salt, baking powder, and baking soda, and beat until well blended (if using an electric mixer, about two minutes at medium speed).

3. Beat egg whites until soft peaks form. Stir one fourth of the whites into the cornmeal mixture, then fold in the remaining whites.

4. Pour mixture into the baking dish. Bake until the spoon bread is golden brown and a cake tester inserted in the center comes out clean, about 40 to 45 minutes. Serve warm, topped with pats of butter if desired.