When I started researching historic rhubarb recipes, I was surprised not to find any in 18th-century cookbooks. It turns out that rhubarb cultivation for food had just begun in Europe then, and it was nonexistent in North America. The root of this tart plant had been used medicinally in China for thousands of years, to treat indigestion and other problems. Rhubarb was eventually grown in Europe for medicinal use, but the stalks weren’t eaten until the mid-18th century, and rhubarb wasn’t a common food until the 19th century.

Benjamin Franklin, who was always one step ahead of everyone else, sent rhubarb seeds from Scotland to his botanist friend John Bartram in Pennsylvania, in 1772. But rhubarb got its first real foothold in the U.S. in the 1790s in Maine and Massachusetts; it was widely available New England by the 1820s. Cultivation then spread south and also west, as pioneer women took rhubarb seeds with them.

Rhubarb’s popularity increased with the introduction in 1837 of a sweeter, sturdier variety called Victoria rhubarb, in honor of Queen Victoria’s coronation. But even this new variety needed to be cooked with a lot of sugar to offset its tartness.

“These are dear pies,” wrote Lydia Maria Child in The American Frugal Housewife (1844), “for they take an enormous quantity of sugar.” Fortunately, sugar prices were dropping, and rhubarb became common in tarts, cobblers, conserves, and pies — in the United States it was actually nicknamed “pie plant.” Here’s a rhubarb pie recipe from Sarah Josepha Hale, author of Early American Cookery: “The Good Housekeeper” (1841):

“In England they call this “Spring fruit,” which is a much more relishing name than rhubarb. Peel off the skin from the young green stalks, and cut these into small pieces — put them in the pie with plenty of brown sugar, you can hardly put in too much. Cover the pie, and bake like apple.”

The other issue with rhubarb is that it releases a lot of water, so it’s easy to end up with a runny pie. Some 19th-century cookbooks suggested stewing the rhubarb and pressing out the liquid before putting it in a pie; others advised baking it uncooked, adding flour to absorb the juices. That’s the most common method today.

I had made strawberry rhubarb pie before, but never plain rhubarb. I didn’t like the idea of stewing the stalks first and made mine using raw rhubarb, in the style of Hale’s recipe. I used a cup of sugar and a few tablespoons of flour, but the result was too tart and soupy. So I tried again, using more sugar and a technique recommended by baker Anne Dimock, who mixes the rhubarb with sugar and flour before pouring it into the crust, instead of adding sugar and flour afterward. This worked beautifully — the pie was a little soupy, but it basically held together. And it tasted incredible, just tart enough to be interesting. “The best pie ever,” said my daughter. 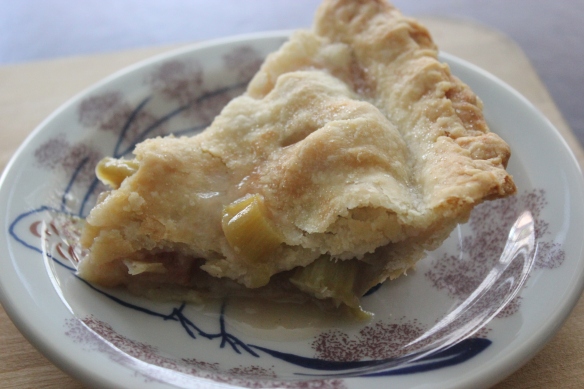 Rhubarb Pie
Adapted from Anne Dimock’s Humble Pie: Musings on What Lies Beneath the Crust and other sources

1. Preheat the oven to 425°F. Roll out the bottom crust and place in 9-inch pie pan (see pastry recipe below).

2. Chop the rhubarb stalks into half-inch pieces (be sure not to use any leaves or root, which are toxic). Blend together the sugar, flour, and cinnamon.

3. Sprinkle about ¼ cup of the flour-sugar mixture in the crust-lined pie pan, then combine the rest with the rhubarb and pour that mixture into the pie pan. Cut the butter into small pieces and dot the pie with them.

4. Roll out the top crust and place over the pie, pinching along the rim to seal. Cut some vents in the top, and sprinkle a few tablespoons of sugar over the crust if you wish.

5. Place the pie on a cookie sheet (in case the juice starts leaking). Bake at 425°F for 15 minutes, then lower the heat to 350°F and bake for an additional 30 to 40 minutes, until juice starts bubbling through the vents. Remove the pie from the oven and cool on a wire rack for several hours, if possible.

1. In a large bowl, stir the flour with the sugar and salt. Add the butter and shortening and mix into the dough with two knives or a pastry cutter, until coarse crumbs form.

2. Add the water a tablespoon at a time, mixing with a fork until the dough holds together well. You may not need the entire ⅓ cup water. Add another 1-2 tablespoons cold water if the dough looks dry. Turn out onto a floured surface and work gently into two rough balls, one slightly larger than the other. Flatten the balls slightly, wrap them in plastic wrap, and refrigerate for at least one hour. (The dough can be made up to a day in advance.)

Leave a Reply to My Kitchen Witch Cancel reply