Thanks to this blog, I cook with a lot of butter these days, since there seem to be few colonial dishes that don’t have large quantities of butter either in them or poured on top. I got the idea for making butter from a book my daughter brought home from the library, Janis Herbert’s The American Revolution for Kids. All you do is put a cup of whipping cream in a large wide-mouthed glass jar with a tight-fitting lid, and shake it for about 10 minutes. The cream turns into whipped cream in about five minutes, then thickens into butter.

Butter making was obviously a little more involved in the 18th century. First, cow’s milk was set aside so that cream would form on top. The cream was then churned, usually in a plunge churn in which a stick (the “dasher”) was moved up and down inside a wooden or earthenware container. This agitation broke down the fat membranes in the cream, forming butter grains and, eventually, solid butter.

Churning took up to an hour or more. The butter was then kneaded by hand or with wooden paddles to extract any remaining milk, then rinsed and packed in barrels or cloth.  As Lydia Child, author of The American Frugal Housewife (1835), instructed readers, “Pack your butter in a clean, scalded firkin [small barrel], cover it with strong brine, and spread a cloth all over the top, and it will keep good…”

According to Allison Aubrey of the NPR blog The Salt, old-fashioned butter churning is making a comeback. You can buy a hand-cranked churn on Amazon or from Lehman’s (an Ohio store that specializes in non-electric old-fashioned products), but they’re not cheap. What I really want, however, is a three-foot-tall antique plunge churn, but there’s not much room in our one-bedroom apartment for that! The jar method was fine but made only a small amount of butter, so I decided to try a stand-mixer recipe by chef Daniel Patterson from The New York Times Magazine. It worked beautifully, yielding two cups of fresh butter and about the same quantity of buttermilk.

1. Leave the cream out of the refrigerator briefly until it reaches a temperature of about 50°F, then put the cream into the bowl of a stand mixer fitted with a whisk. (A 5-quart bowl is just big enough.) Tightly cover the top of the bowl with plastic wrap, leaving no gaps — or, as Patterson writes, “it will look as if a milk truck exploded in your kitchen.”

2. Start mixer on medium-high speed. In about 5 to 8 minutes the cream will thicken and turn pale yellow. It then reaches a pebbly stage, and a minute or two later the butter will separate and liquid will suddenly start splashing against the plastic wrap. When this happens, stop the mixer. 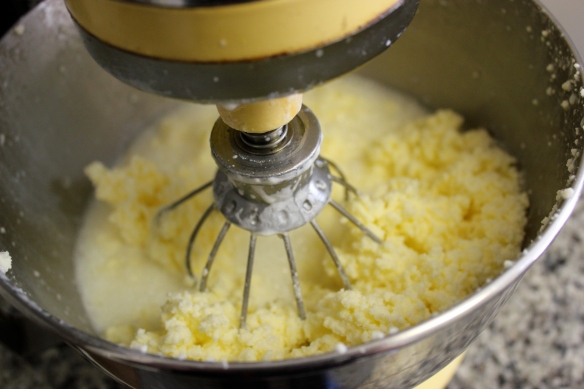 4. Knead the butter in the strainer set over the first bowl to extract any remaining liquid. (My daughter happily took on this task.) Keep kneading until the butter is dense and creamy, about 5 minutes. Try not to push the butter down onto the strainer — if you do, you may need to scrape butter off the underside of the strainer and knead it again.

5. Strain the extracted liquid into the set-aside buttermilk and refrigerate.

6. Mix salt into the butter, if you wish. (I added about 1/2 teaspoon salt to half of the butter and left the rest unsalted.) Transfer to an airtight container and refrigerate.