As my daughter’s spring break approached recently, I wondered whether I would get any blogging done, when inspiration struck: We would have an 18th-century tea party for her dolls, one of which is Felicity, American Girl’s so-called “spunky colonial girl.”  We even had doll-size blue willow china, a nice gift from friends.

Katie is not a girly girl — she’s more likely to make her dolls challenge each other to a duel than have tea — but she liked my idea well enough and got Felicity and Ivy suitably attired in colonial clothing. (Ivy is a Chinese-American girl from the 1970s, but let’s not quibble.)

I decided to make macaroons and sponge cake, both very common in the 18th century. The macaroons tasted good but were a little flat, so I’m not sharing that recipe quite yet. But they were easy to cut into doll-size rounds, and Felicity and Ivy loved them — in fact, they got a little grabby. 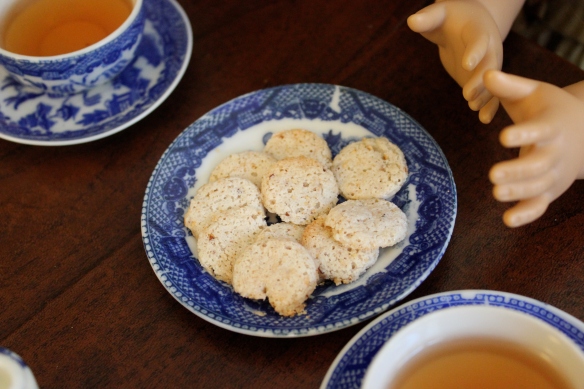 On to the sponge cake, which is made with eggs, sugar, and flour but no butter or other shortening. The earliest known English sponge cake recipe appeared in 1615. In some older recipes, the spelling is spunge, not sponge, and as usual I prefer the weird old spelling. Sponge cakes were sometimes called Savoy biscuits (a.k.a. lady fingers), or Savoy cake, from the French gâteau de Savoie and Italian gâteau de Savoja. And the reason I’m getting all pedantic here is that there’s an interesting story behind the gâteau: Legend has it that a 15th-century Italian count from the House of Savoy gave this cake to Charles of Luxembourg, the future Holy Roman Emperor, who liked it so much he made the count a duke and imperial officer, setting in motion the House of Savoy’s rise to power — and eventual rule of Italy!

Sponge cakes were less famous and less common in 18th century America. Was it because the colonists felt compelled to put butter in everything? Amelia Simmons, America’s first cookbook author, doesn’t give a recipe for one, although she has a few somewhat similar biscuit recipes. But Thomas Jefferson loved sponge cake, and Doris Farrington, author of Fireside Cooks & Black Kettle Recipes, attributes the following recipe to Jefferson’s wife, Martha:

One dozen eggs, whites and yolks beaten separately; one pint of sugar; one pint of flour; juice and grated rind of one lemon; mix yolks, sugar, flour, and lemon. Add Whites. This is a good cake.

Elsewhere I’ve read that Jefferson brought his recipe for sponge cake back from Europe, which makes more sense since he went to France after Martha died. In any case, the above recipe is a bit lacking in detail, so I consulted Mary Randolph’s recipe for “Savoy or Spunge Cake” in The Virginia Housewife, Or Methodical Cook (1860). Hers has a different method — the whites are mixed with the yolks before sugar and flour are added. Damon Lee Fowler, editor of the wonderful book Dining at Monticello, writes that “period methods for sponge cake vary wildly.” I decided to try his version, which follows Jefferson’s method but Randolph’s proportions.

Randolph also suggested baking the cakes in either little tin moulds or “paper cases” — 19th-century cupcake liners! I don’t think these were around in Jefferson’s time, and was surprised that they were in Randolph’s. I used liners as well because I have a ton of them, and that’s my feeble excuse for straying from authenticity.

These cakes came out really nicely — very soft, very spongy, but in a good way. I made some in regular-size muffin pans, some in mini-muffin pans (for the dolls), and the recipe yielded about 16 regular muffins and 16 mini muffins. Jefferson supposedly liked to have these cakes with wine, but our dolls stuck with tea. Between the macaroons and the sponge cake, however, they clearly overindulged. 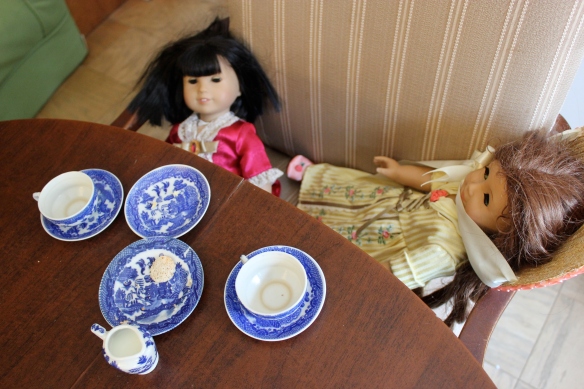 Adapted slightly from Dining at Monticello

1. Preheat oven to 350°F. Put cupcake liners in  24 standard muffin cups (or twice that for mini muffins), or butter the cups and dust with sugar.

2. Separate the egg yolks and whites into two bowls. Using an electric mixer or whisk, beat the egg yolks until smooth and light. (I recommend the mixer, as I used a whisk and thought my arm was going to fall off — this batter becomes very stiff.) Beat in the sugar very gradually, and mix until the batter falls in thick ribbons. Beat in the zest. Gradually add the flour, mixing well.

3. In a separate bowl, whip the egg whites until they form stiff, glossy peaks. Fold one-quarter of the egg whites into the batter, then gently fold in the rest of the egg whites, one third at a time. Spoon the batter into the pans, filling the cups about two-thirds full. Bake until golden brown, about 15 minutes — 8-10 minutes should be long enough for mini-muffin pans (watch them carefully).

4. Cool pans on wire racks. If not using paper liners, run a knife around the edges of the cakes, then invert the pans to remove the cakes. Cool completely on wire racks.

Serve dusted with superfine sugar if desired, although I think these cakes are sweet enough as is. They go nicely with preserves. I found the sponge cakes got very spongy after a day or so and stuck to each other, so don’t layer them when storing. But they’ll still taste good.