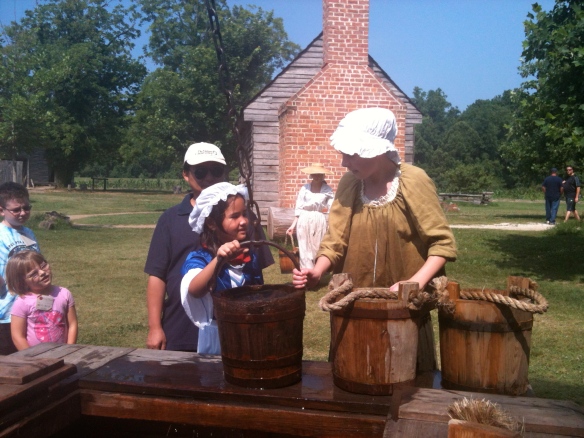 This blog was inspired by a family trip to Colonial Williamsburg in Virginia. I fell in love with everything about this beautifully restored 18th century town — its architecture, its food, and its low-tech tranquility.

I was reluctant to come home to New York City. I wanted to throw my cellphone down a well and become a colonial “re-enactor.” But my husband is a city boy, and anyway, did I really want to wear a bonnet and thick knee socks every day? I decided, however, to try re-enacting one element of colonial life in my small Manhattan apartment: the cooking.

This will not be truly authentic colonial cooking. I don’t have a brick oven or a garden, just a lot of baking pans and a pile of historic cookbooks. And I don’t promise to cook colonial food every day. My butter- and cream-hating husband would not be happy, nor would my daughter, who would miss spaghetti and pizza.

Recipes from the 18th and early 19th centuries are fun to read but hard to follow. The measurements and instructions tend to be vague. “Bake in a quick oven for a good while” is typical. I’ll follow some very old recipes in this blog, but also adaptations from later cookbooks.

I’ll also use modern appliances when they’re helpful. Yes, a slower pace of life is nice, but stirring everything by hand is not. I bet those colonial housewives would have wept at the sight of a stand mixer.

May 2014 update: After nearly two years of primarily 18th-century cooking, I decided to expand the scope of this blog to include the 19th century and beyond. I wanted to try more recipes by the great cookbook authors of 19th-century America — writers like Lydia Maria Child, Eliza Leslie, and Maria Parloa. I also wanted to cook with ingredients like chocolate (which was only used as a beverage in this country in the 18th century). And vanilla. And baking powder! Speaking of which, the blog’s focus going forward will be baking and desserts. Such a sacrifice on my part, I can’t tell you!

–Karen Hammonds is a freelance editor and writer. A former senior editor at WeightWatchers.com, she contributed to a blog at Saveur.com and has edited recipes for Saveur, Bon Appétit, and other publications.

24 thoughts on “About This Blog”