“Apples…are highly useful in families, and ought to be universally cultivated, excepting in the compactest cities. There is not a single family but might set a tree in some otherwise useless spot, which might serve the twofold use of shade and fruit; on which 12 or 14 kinds of fruit trees might easily be engrafted, and essentially preserve the orchard from the intrusions of boys, &c. which is too common in America.”

Living as I do in one of the “compactest cities,” I have no spot for an apple tree. But I do live a block from a farmers’ market with a huge variety of apples. I bought some Golden Delicious the other day and decided to make apple dumplings, a dish that was popular in Simmons’s time.

I first tried boiling them, the most common method in the 18th century. I wrapped the apples in pastry, then tied them in squares of cotton from an old pillow sheet:

I then cooked them in a vat of boiling water for 45 minutes. I wasn’t too confident about this project, and my fears were justified. The pastry tasted like floury glue and the apples were mushy. I’m not sure what went wrong — maybe the pastry was too thick. If any colonial re-enactors read this and have advice for me, I’d love to hear it.

I then tried baking the dumplings (a method that became common in the 19th century) and had much more success. The pastry was crunchy, the apples tender. The recipe that follows is based on several sources, including Betty Groff’s Pennsylvania Dutch Cookbook and Letha Booth’s The Williamsburg Cookbook.

1. Make pastry (recipe below). Refrigerate for at least 1/2 hour.

2. Peel and core the apples. (I recommend using a corer — I don’t have one, and let’s just say my “peeled” photo is more publishable than my “peeled and cored” one.)

3. Roll out the pastry dough about 1/8″ thick and cut into four 7-inch squares. (The pastry size may need to be revised depending on the size of your apples.) Place an apple in the center of each square.

4. Mix together the white sugar, 1/2 teaspoon cinnamon, and 1/4 teaspoon nutmeg and put a few tablespoons of the mixture inside each apple, topped with a teaspoon of butter.

5. Moisten the edges of each pastry square with cold water and fold the pastry up around the apple, pressing firmly to seal. (I did some more elegantly than others, as you can see below.) Place apples in baking dish and chill in refrigerator for 1 hour. 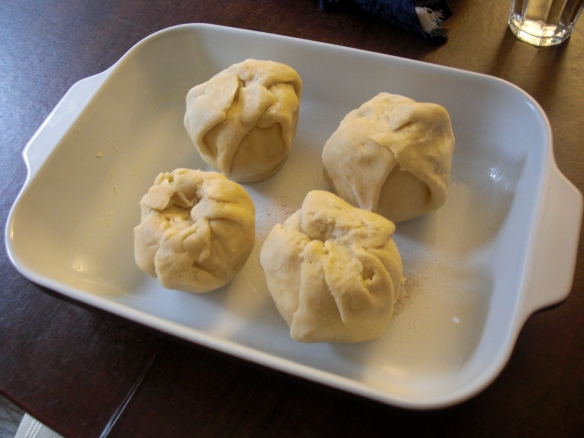 7. Combine the brown sugar, hot water, and remaining 1/4 teaspoon cinnamon in a saucepan and bring to a boil. Lower heat and simmer for 3 minutes. Remove from heat and stir in remaining butter. Pour syrup over apples.

8. Bake apples for 40 to 45 minutes until the pastry is golden brown, basting with syrup every 15 minutes.

Serve dumplings hot, drizzled with syrup and accompanied with whipped cream, if you like. You might want to cut them in two at the table — unless you have very hungry guests.

1. Sift the flour into a large bowl, and whisk in the salt. Add the butter and shortening and blend until pea-sized clumps form.

2. Make a well in the center of the mixture and add the water. Mix quickly with a fork to form a soft dough. Add another 1-2 tablespoons of cold water if the dough looks dry. Turn out onto a floured surface and work gently into a rough ball. Wrap in plastic wrap and refrigerate for at least 30 minutes. (The dough can be made up to a day in advance.)